Recently, I recevied an email from Suzanne Belshaw, regarding some of her latest 'Colour-ring' sightings.  Suzanne, assisted me during the summer months, with her sightings at Antrim Marina, in order to identify all of the 'Resident' Black-headed Gulls at the site.  Suzanne now concentrates her efforts at Kinnego Marina and Lurgan Park, as well as looking for 'rings' elsewhere.


I'd like to thank Suzanne for allowing me to post her latest sightings on my Blog, along with photos and the ringing details that were sent to her.

Suzanne spotted (White 1K5:C), at Ardglass Harbour on the 24th August 2016.  Having reported her sighting to Iain Livingstone, the secretary for the Clyde Ringing Group, in Ayrshire, Scotland, he replied with this gull's history.


1K5:C, was ringed as a chick, on the 28th June 2014, at Horse Island Nature Reserve, Ardrossan, Ayrshire.  There has been two previous re-sightings prior to Suzanne's - the 21st June 2015 and on the 17th January 2016, both of these were also at Ardglass Harbour.  The distance from Horse Island NR to Ardglass, is around 161 kms / 100 miles, in a south-west direction.

A second 'Colour-ringed' Great Black-backed Gull, was sighted just down the road from Ardglass, at Killough, again on the 24th August 2016.  This immature gull, was ringed by the Manx Ringing Group on the Isle of Man, a large island situated in the Irish Sea, between Northern Ireland and the British Mainland.  My guess, is that it was ringed at the Point of Ayre Gravel Pits, in the north of the island.  The distance between the two sites, is roughly 88 kms / 52 miles - west-south-west.


Suzanne, has reported this gull to both the BTO and Kevin Scott - the Ringing Secretary for the Manx Ringing Group.  Up to the posting of this article, there has been no contact from either party.  When Suzanne receives a reply, I will add the details in the 'Ringing Details Received' section, in a later post.

The third of a trio of 'Colour-rings' spotted by Suzanne on the 24th August 2016, was   T96  on an Oystercatcher, again at Killough, County Down.  Harry Scott from the Grampian Ringing Group in Scotland, replied to Suzanne, not only supplying the ringing details, but also a brief outline of their Oystercatcher project:- 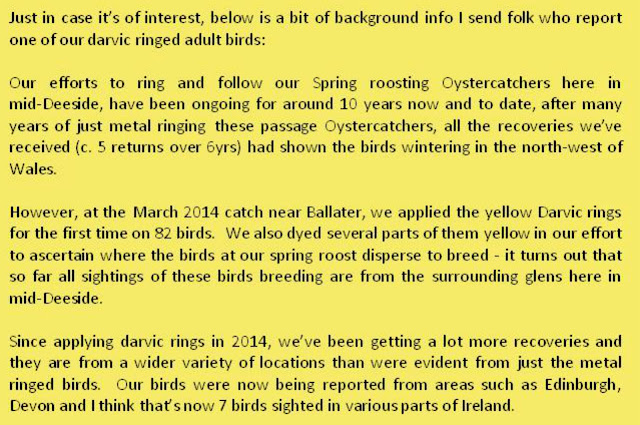 T96  was one of a brood of three chicks, ringed on the 13th June 2015, in the Strathdon area of Aberdeenshire, in Scotland.  Suzanne's sighting was a first for this Oystercatcher, having flown 366 kms / 227 miles, south-west to get to Killough.


Harry, also sent Suzanne a photo of   T96  and it's siblings, just after they had been ringed (photo below).

During my recent visits to Whitehouse Lagoon, I have been on the lookout for three Black-headed Gulls of special interest.  Two of these are foreign-ringed gulls - White T56W from Poland and   JM75   from Norway.  I have already reported about the return of White T56W, but as yet, there has been no sightings of   JM75 .


The third gull is   2ALP  from the Northern Ireland Study being run by Adam McClure.  Having been ringed as a chick in June 2013, at Blue Circle Island in Larne Lough, I spotted it twice last winter at Whitehouse Lagoon, it's first re-sightings.  The big news however, came in July, when   2ALP  was sighted at Hovindammen, in Norway, by John Sandøy (Read Adam's Post Here).  This is the first record of a known NI bred Black-headed Gull, that may have bred elsewhere in Europe.

Expecting this gull's return to Whitehouse Lagoon for another winter, Suzanne Belshaw beat me to it, by recording   2ALP  there on the 28th September 2016.

An Example of a Metal Ring

An Example of a Darvic-Ring

Birds that are part of a study, have either a Darvic-Ring, Collar, Wing-Tag or Nasal Clip, fitted in addition to a Metal-Ring. Different Colours and Codes are used for each project and some birds may have a combination of just Coloured-Rings and possibly a Flag as well.

Report a Metal or Darvic Ring

Links To Other Birding Sites & Reports

All My Own Work

Originally, I began this blog in support of the Northern Ireland Black-headed Gull Study, which was started by Adam McClure in the winter of 2012. Having become heavily involved with his project, I eventually began searching for rings elsewhere in Northern Ireland, documenting findings through my blog. All of this, also led to my re-training as a bird ringer, and eventually, I began my own colour-ringing project in 2017, concerning Common Gulls, based mainly on Rathlin Island.
Common Gulls had become a big favourite with me, and early in 2017, I took over control of Shane Wolsey's former Common Gull project, which was based on Big Copeland Island, with birds rung there between 2009 to 2014. I'm also the ringing co-ordinator for this project too.
Sadly, through the pressures of work and family commitments, Adam had to give up on his Black-headed Gull Study in June 2018. I have taken over the role as the ringing co-ordinator for Adam's former project, and can now respond to sightings.
One of the aims of this blog, is to encourage other birdwatchers to take up the task of 'Ring Reading'. There are any amount of birdwatchers around, but dedicated ring readers are in the minority. As can be seen through my blog, although Northern Ireland is a tiny country, there are lots of rings out there to be found.
There is no copywrite concerning my blog. Anyone wishing to use any of the content, are free to do so, and an acknowledgement would be appreciated. However, photos belonging to other observers, in reality belong to them, therefore permission to use their photos can be arranged through myself.