On my previous visit to Big Copeland Island (30th May 2021), my main priority was to locate colour-ringed Common Gulls which belonged to Shane Wolsey's former project on the island which ran from 2009 until 2014.  It has always been my belief, that there would be several birds nesting that have never been recorded since the day they were ringed.  Despite the poor condition of some darvic's, and a terrible heat haze that day, I successfully photographed a number of colour-rings which also included three first ever re-sightings.
My secondary aim, was to see how things were progressing with their breeding season, as I will be colour-ringing a number of  chicks in an attempt to follow on with Shane's former project, which will run alongside my own Common Gull project which I began on Rathlin Island in 2017.  Indeed, a small number of chicks had hatched, so my boatman and I agreed on another visit for Sunday 13th June.
Despite a warm day being forcast, conditions on the 13th were not as expected.  The day was cloudy, with a fairly coldish breeze coming in off the sea.  Today's visit saw me both reading rings on adults, as well as colour-ringing the largest chicks that I could find.  As there was no heat haze today, photographing colour-rings presented no problem, with 8 being recorded on Common Gulls, plus 1 colour-ringed Herring Gull.  A small number of colour-ringed Common Gulls, were also seen, but were too far away to capture the codes.  2 first ever re-sightings were included among the 8 Common Gulls.
Whilst walking through the colonies, I was horrified to note that many chicks were lying dead, most of which were just a few days old.  I had no idea what could have caused the high number of deaths.  I wondered if it was due to a food shortage, but what is the main diet of Common Gulls at this time of the year anyway?  The weather cannot be blamed, as it has been reasonably good since my previous visit.
I was in the process of colour-ringing my 19th (and last) chick, when I was confronted by whom I believe to be, the island's gamekeeper.  I was asked whether or not, I had permission to be on the island.  I informed the gentleman, that the island's owner, Alan McCulla, said I could visit the island to study the gulls at any time as he understood what I was trying to achieve.  To my astonishment, I was informed that Alan's son Ryan is now in charge of the comings and goings on the island, and that he wants no one on the island without his permission.  As I was already on the island, I was allowed to continue my activities for that day only, but I had to obtain Ryan's permission for future visits.
Since then, I've tried to contact Ryan through a couple of different avenues, but have had no reply.  My boatman has since offered me another couple of visits to the island, but I was forced to decline them, as I would be breaking the conditions of my ringing permit if I did not have the neccesay permissions in place.  I was gutted to say the least, as I have tried so hard to get onto Big Copeland Island to further Shane's former project.  Between last years single visit, and the two visits that I've undertaken this summer, I've recorded a few first ever re-sightings, though I'm sure there are many others to be found.
As I write now, there is still no reply from Ryan, and it is far too late to ring any more chicks.  I was hoping to colour-ring a target of 100 youngsters.  I must thank my boatman for all his help, as he is so reliable and friendly.  Over the coming months, I'll try my best to get in touch with Ryan, and see if we can agree on anything for next year's breeding season.
2ACF , was a gull that I personally recorded for the first time, on my previous visit on the 30th May 2021.  The bird was ringed as a chick, on the 14th June 2005, here on Big Copeland Island.  Having been ringed with just a metal ring, it went un-recorded until the 14th May 2010, when it was captured on the island as a breeding adult, and the colour-ring was then fitted.  Despite the colour-ring, the bird still went un-recorded until I got it here.  The duration since being ringed, has now risen to 15 years, 11 months and 30 days.  As the ring is still in fairly good condition, it would be fantastic if the gull could be spotted at it's wintering site wherever that may be. 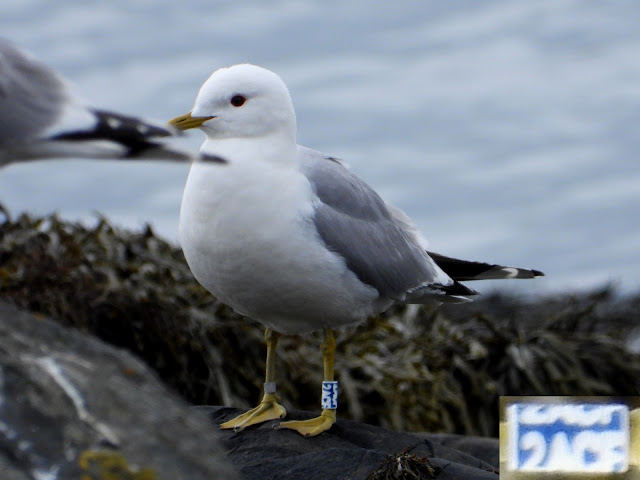 Common Gull  -    2ACF   -  Big Copeland Island, The Copeland Islands, Co. Down  (13 Jun 2021)
(Ringed as a Chick, on the 14th June 2005, on Big Copeland Island)
My sighting of -   2AFN , was a first ever sighting for this gull which was ringed here on Big Copeland as a chick, on the 7th June 2010.  The duration as of today's sighting, is 11 years and 6 days.  As can be seen from the condition of the colour-ring, it would be very difficult to record the bird away from the breeding colony.  It is only when gulls are tied to their nests, that it becomes possible to get closer to them in order to capture the indentations on the ring.  This underlines how I need to find un-recorded birds from Shane's former project, to record survival rates as well as the longevities. 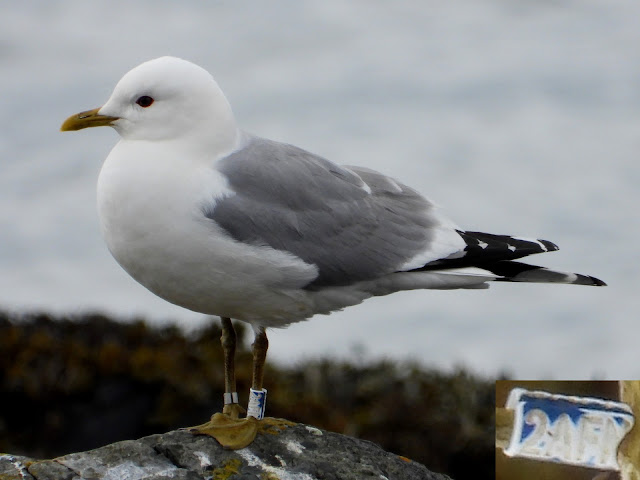 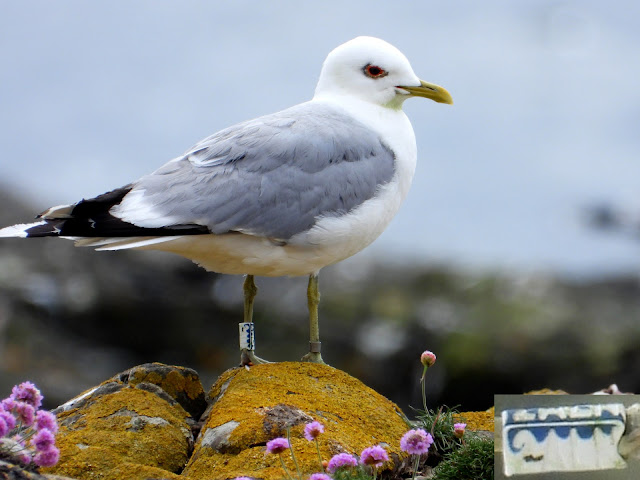 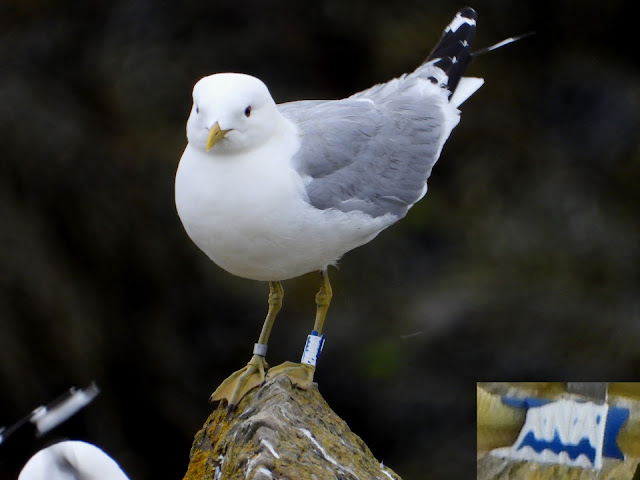 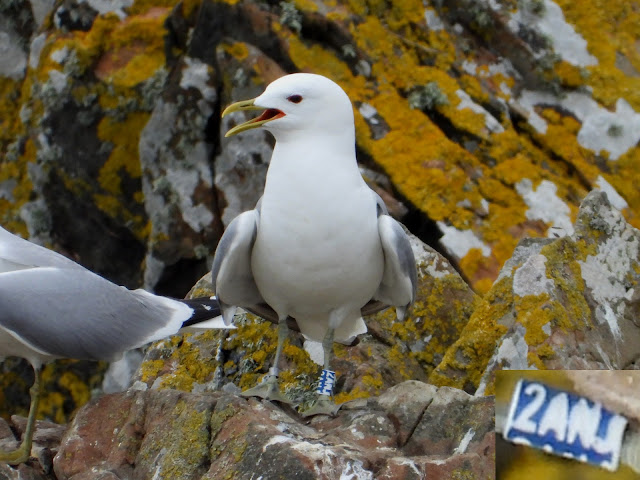 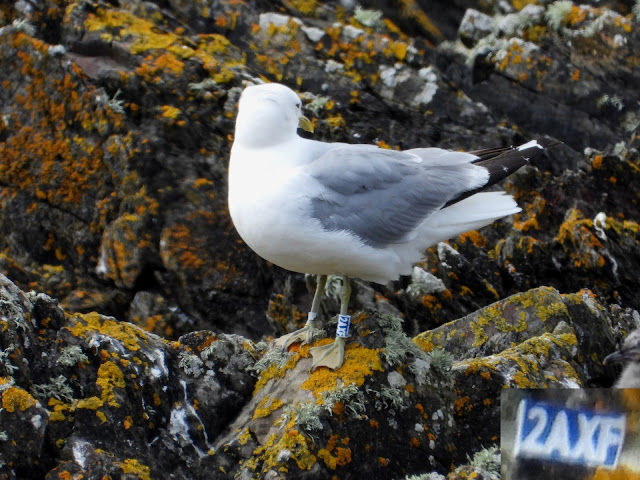 Common Gull  -    2AXF   -  Big Copeland Island, The Copeland Islands, Co. Down  (13 Jun 2021)
(Ringed as a Chick, on the 29th June 2013, on Big Copeland Island)
2AAJ , was a gull that was recorded for the very first time, during my first ever visit to Big Copeland Island on the 16th June 2020, so I was well pleased to see this bird for the second time today.    2AAJ  was ringed here on the island, as an un-sexed breeding adult, on the 18th May 2009, which makes the duration as of today's sighting - 12 years and 26 days, though in reality the bird is much older.  Again, with a colour-ring in such good condition, I'm baffled as to why the gull has never been recorded away from the island. 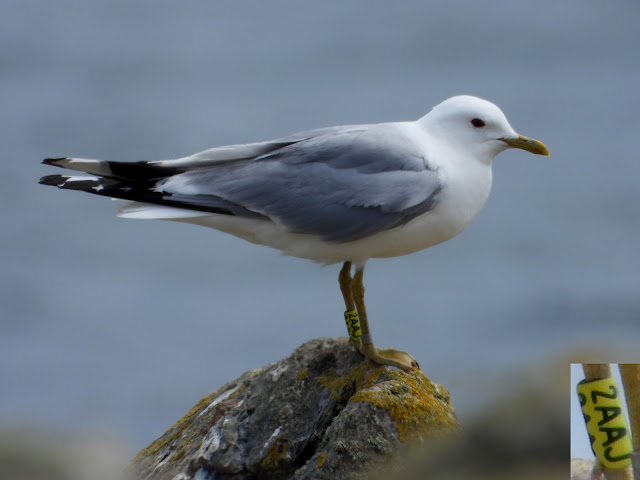 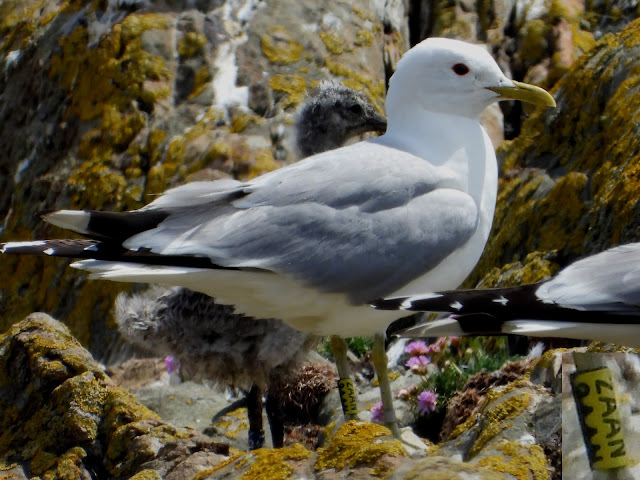 Common Gull  -    2AAN   -  Big Copeland Island, The Copeland Islands, Co. Down  (13 Jun 2021)
(Ringed as an Un-Sexed Breeding Adult, on the 18th May 2009, on Big Copeland Island)
One colour-ringed Herring Gull was also recorded during today's visit to the island.   2K:W , was ringed as an un-sexed breeding adult, here on the island on the 5th May 2015.  It's first ever re-sighting was made by me on the 20th October 2018, when I photographed the gull on the seafront at Donaghadee, which lies 3 kms away from the island.  On the 16th June 2020, when I made my first ever visit to the island, I recorded just the second ever sighting of the bird.  Today's sighting takes the duration to 6 years, 1 month and 8 days. 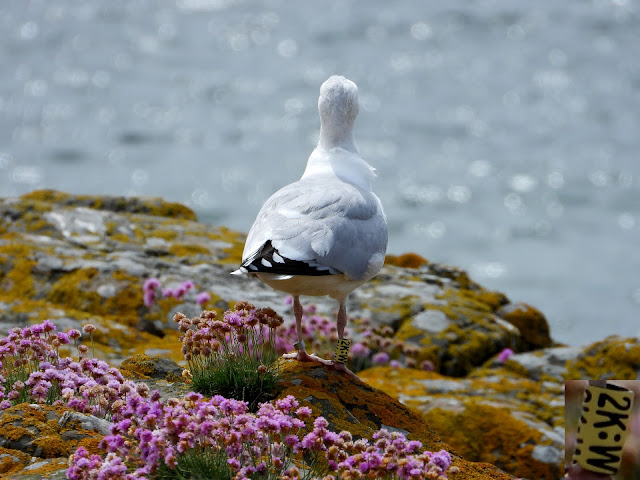 An Example of a Metal Ring

An Example of a Darvic-Ring

Birds that are part of a study, have either a Darvic-Ring, Collar, Wing-Tag or Nasal Clip, fitted in addition to a Metal-Ring. Different Colours and Codes are used for each project and some birds may have a combination of just Coloured-Rings and possibly a Flag as well.

Report a Metal or Darvic Ring

Links To Other Birding Sites & Reports

All My Own Work

Originally, I began this blog in support of the Northern Ireland Black-headed Gull Study, which was started by Adam McClure in the winter of 2012. Having become heavily involved with his project, I eventually began searching for rings elsewhere in Northern Ireland, documenting findings through my blog. All of this, also led to my re-training as a bird ringer, and eventually, I began my own colour-ringing project in 2017, concerning Common Gulls, based mainly on Rathlin Island.
Common Gulls had become a big favourite with me, and early in 2017, I took over control of Shane Wolsey's former Common Gull project, which was based on Big Copeland Island, with birds rung there between 2009 to 2014. I'm also the ringing co-ordinator for this project too.
Sadly, through the pressures of work and family commitments, Adam had to give up on his Black-headed Gull Study in June 2018. I have taken over the role as the ringing co-ordinator for Adam's former project, and can now respond to sightings.
One of the aims of this blog, is to encourage other birdwatchers to take up the task of 'Ring Reading'. There are any amount of birdwatchers around, but dedicated ring readers are in the minority. As can be seen through my blog, although Northern Ireland is a tiny country, there are lots of rings out there to be found.
There is no copywrite concerning my blog. Anyone wishing to use any of the content, are free to do so, and an acknowledgement would be appreciated. However, photos belonging to other observers, in reality belong to them, therefore permission to use their photos can be arranged through myself.